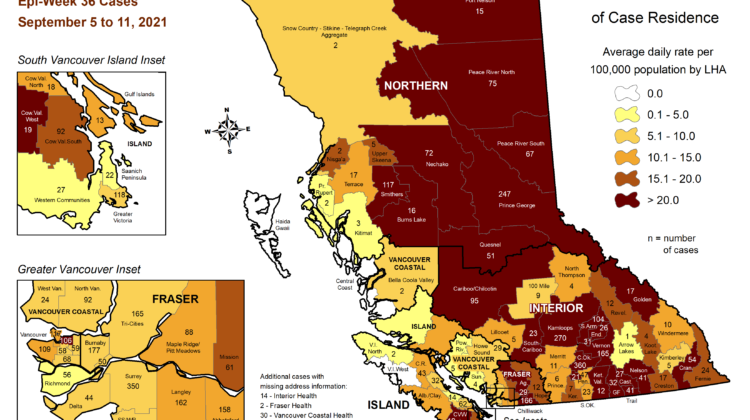 The fourth wave of the COVID-19 pandemic hit Northern BC hard this week.

The Prince George Local Health area (LHA), which also encompasses McBride, Valemount, and Mackenzie saw 247 cases between September 5 – 11, according to the BCCDC.

Compared to the rest of the province, the PG LHA saw the third-highest amount of cases during this time frame, following only the Central Okanogan LHA which had 360, and the Kamloops LHA, which saw 270.

Between September 5 to 11th, the Prince George LHA saw nearly double the number of cases identified from the week before, as 142 new cases were identified between August 29 to September 4.

The majority of LHA’s in Fraser Health, Vancouver Island Health, and Vancouver Coastal Health have at least 70% of their 12+ population fully vaccinated, however, LHA’s in the Interior and North continue to fall behind this mark.

Cases continue to rise in the Peace River North and South Local Health areas, which have notoriously low vaccine uptake as the regions saw 75 and 67 cases between September 5-11, respectively.

The Peace River North, South, and Fort Nelson areas have by far the lowest vaccine uptake in the entire province, along with the Nechako area, which has only 58% of residents 12+ fully vaccinated.

Cases also jumped in Quesnel, an area with 62% of residents 12+ fully vaccinated,  as the area saw 51 cases this past week, up from the 33 identified the week prior.

Across Northern Health there are 849 active cases while 46 people are in hospital, 12 of whom are in ICU.