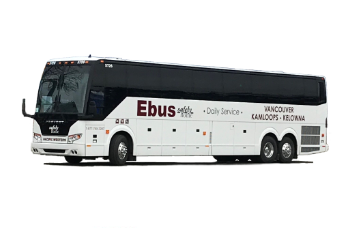 (Photo supplied by Ebus BC)

Alberta based EBus BC has applied to the Passenger Transportation Board to service two new regions in B.C; Salmon Arm and Prince George.

The Salmon Arm route according to a news release will be an addition to the company’s existing run between Kamloops and Kelowna, providing, service to Chase, Sorrento, Salmon Arm, Enderby, and Armstrong.

“It’s due to a lot of public feedback. We fielded numerous inquiries, comments, and suggestions on a nearly daily basis, and this was a good opportunity,” John Stepovy, Director, Sales & Business Development told MyNechakoValleyNow.com.

“It’s a good opportunity to go to Prince George to connect northern British Columbia with BC Bus North operating some of the northern corridors, and this is a conduit to be able to connect some of those northern centres into Kamloops, Kelowna, Vancouver, and in between and beyond, so it’s very exciting. And then Salmon Arm, again same sort of idea.”

Stepovy said EBus BC is currently working on stop locations, schedules, and pricing, with a goal to launch service as soon as possible after receiving approval from the Passenger Transportation Board.

“Our primary goal was to apply and hopefully we get positive authorization from the province very soon and then from there we can work towards finalizing all those details, so we should hopefully within in the next couple of weeks have more details firmed up and be able to make some more announcements.”

“Ultimately we want to make sure that it’s sustainable.”