Prince George-Peace River-Northern Rockies and the Cariboo-Prince George ridings could see a reconfiguration due to some changes in the Southern Interior.

The Federal Electoral Boundaries Commission for BC is suggesting that more of P.G. should be moved over to the Prince George-Peace River-Northern Rockies riding.

Cariboo-Prince George would cover less area from the city, but would encapsulate more of the Southern Interior.

Prince George-Peace River-Northern Rockies would have a population of 116,962 people, and would consist of: 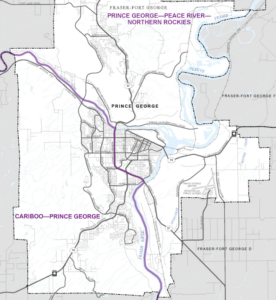 Cariboo-Prince George would encompass the part of PG that lies southerly and westerly of the line in the map above, would have a population of 117,160, and cover:

Northern BC residents can still have their voice heard on the proposal on May 9th.

A meeting is being held in PG at the Ramada Plaza by Wyndham starting at 12 PM, and another meeting will be held in Vanderhoof at the Nechako Senior Friendship Centre starting at 4:30 PM.

A virtual meeting was held for both the North and the Interior yesterday (Tuesday) evening.