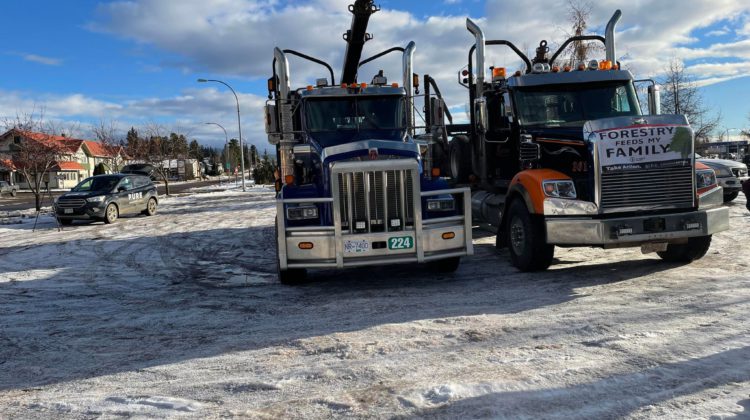 Trucks at the goat park in Smithers (supplied by: Lindsay Newman)

A rally was held Thursday (Nov 18) over the recent announcement by the province regarding Old Growth Logging deferrals.

On November 2, B.C. issued a news release stating it will defer 2.6 million hectares of old growth forest within the province.

It added that this is only temporary until better management is in place. 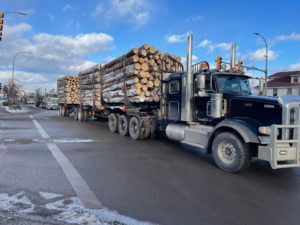 Starting at 10 a.m. many loggers and contractors started a procession down Highway 16.

According to Organizer Shari Smaha, the rally is to raise awareness regarding how the old growth deferral will impact jobs and the livelihoods of the residents of the Bulkley Valley.

She said as of right now they are not sure what that’s going to look like.

“There’s a lack of transparency and information coming from the government. It has kind of put everyone into a tailspin because nobody knows how it’s going to affect us,” Smaha said.

She added the five person panel that was created to discuss the issue had no forestry representation.

“We are very lucky here in Smithers and the greater valley area, we’re under 20,000 people and we have so many of these processing plants that put tens of millions of dollars into our local economy every year,” said logging truck driver Rick Fuerst.

He added the jobs that come from the forestry sector are important to small communities.

“We want to have a voice, we want to have a rational conversation around these issues and how forestry moves forward but everybody needs to be included. We can’t make these decisions in Victoria and drop them on everybody else in the province,” Fuerst said.

A meeting is expected to take place Friday with representatives from the industry, the Town and the Province regarding old growth deferrals. .