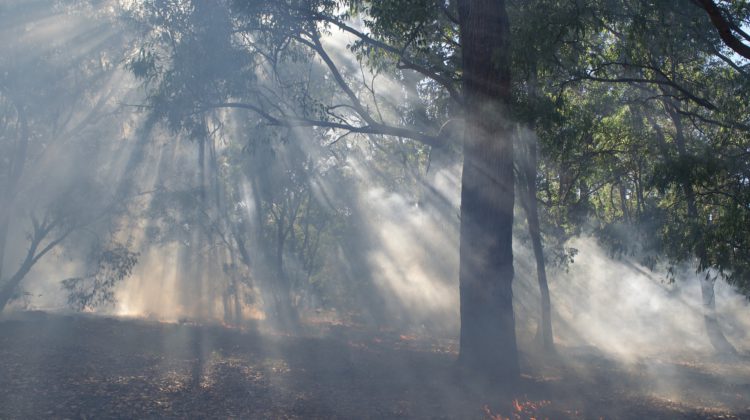 (Image by Terri Sharp from Pixabay)

BC saw a tough wildfire season, with many people getting displaced, losing their homes, or in some cases losing their lives.

According to the BC Wildfire Dashboard, there are still 136 active fires in the province, but as we start to see morning frost and cooler temperatures roll in fires start to settle and we get an idea of how much the season has cost.

“So it doesn’t take into account things like cost recovery from out of province deployment, because we were able to assist outside of province in the earlier part of the season, but the number right now is in the $500 million category,” said Kelsey Winter with the BC Wildfire Service. 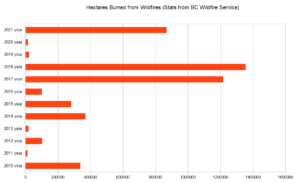 Stats supplied by BC Wildfire Service (Chart made by Brody Langager, MyPGNow)

Winter said resourcing was a major issue for this year’s wildfires, as the fires were not only large, but they were consistent across Canada and the United States.

Firefighters arrived from across Canada, and even from Mexico to help battle the blazes, but Winter said cooperating with other provinces and countries goes beyond just sending manpower.

“There’s learning that can happen between countries. Australia has had similar fire seasons to Canada, and has some similarities in fuel traits and characteristics that we can learn from.”

“And they’re ahead of us in terms of really talking about prevention, and what you can do to prevent wildfire disasters. And California is starting to tell that story as well,” she added.

California has been implementing cameras that are being used to detect smoke from long distances and is using artificial intelligence to monitor the camera feeds and send alerts when it detects something.

“It’s standing together, but it’s also learning from what we’re going through. So that we aren’t having to face the same challenges, one after another, but that we’re reaching out through these conferences and through networking opportunities and job shadowing to find out what’s working and apply it here.”

Winter adds that there are steps BC residents can take to help prevent wildfires but notes that no matter where you live in BC you are at risk for wildfires. 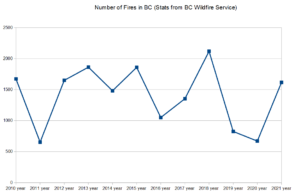 Stats supplied by BC Wildfire Service (Chart made by Brody Langager, MyPGNow)

She said Firesmart BC lists ways to help protect your home, adding that if neighbourhoods get involved that can reduce the risk to houses.

“Because protecting your home hopefully encourages your neighbour to do the same. And if we have whole neighbourhoods, like in Logan Lake that are fire smart, then we are able to prevent wildfire disaster.”