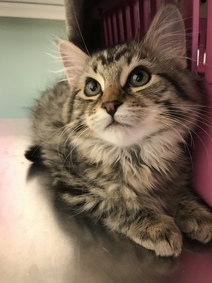 It’s the perfect time for anyone looking to adopt a four-legged or feathered friend to do so.

The BC SPCA is offering a half-off adoption promotion until October 6 to help free up space in its shelters across the province.

Lorie Chortyk, general manager of communications for the BC SPCA says many shelters are very full right now and the organization is now working to create space by providing animals with safe homes.

“What’s been happening in the recent weeks is we’ve had a lot of large-scale cases whether that’s cruelty cases involving abuse or hoarding cases, we just have a large number of animals in our shelters,” Chortyk said.

All companion animals such as dogs, cats, rabbits, and small animals will be part of the promotion along with farm animals except for horses.

She says adoption is perfect for anyone looking to bring a pet into their home because a lot of the time the animals haven’t been able to experience real love from humans.

She adds a lot of the time when animals are adopted they go from being in extremely vulnerable situations to becoming the centre of their adopted families entire world.

There are 44 BC SPCA shelters across BC, many of which are situated in the North as there are locations in Prince George, Fort St. John, Prince Rupert and Dawson Creek.

Chortyk says rural shelters such as those in the North and the Kootenay’s often have a harder time finding homes than urban shelters because of the smaller populations.

“We encourage anyone who has been thinking about adopting a pet to take advantage of this promotion. You will not only be providing a loving home for a deserving animal, but it will also allow us to create capacity for abused and neglected animals who urgently need our help.”

A list of adoptable animals can be found on the BC SPCA website, as well as adoption application forms.

Adoption prices are determined by animal type and the region the shelter is located in.