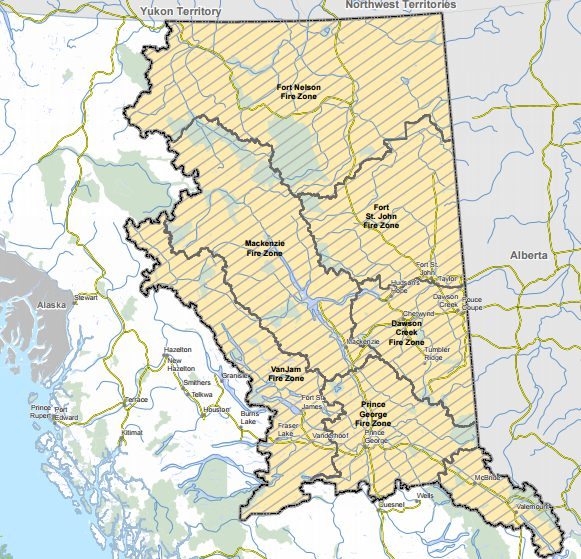 It was a fire-free weekend as the heatwave for the Prince George-area reached its apex.

Temperatures got as hot as 33-degrees by Sunday with a new daily high being set for the first time in 20 years.

Fire Information Officer with the Prince George Fire Centre, Amanda Reynolds says it was nice to see the public take some responsibility for their fire use.

“There was no new fires being reported, which was a good sign as people were cautious with their fire use and any campfires so we really appreciate that.”

However, Mother Nature could make a bit of U-turn as early as today with the risk of thunderstorms along with some gusty winds and even hail.

With the 7-day forecast looking like a wet one, Amanda Reynolds adds we could see additional fires if we see too much lightning.

“There could be the potential for more starts if we see this lightning and then we could potentially see more hold over lightning fires from the strikes that happened over the weekend but we have resources available to action those fires and we have air tankers and helicopters available if need be.”

Luckily, the Dog Creek Trail Wildfire near Vanderhoof is under control and 100% contained.

The blaze did not experience any flare-ups during the five-day heatwave across northern BC.

However, smoke is still visible within the Nechako Valley from a different fire.

“The smoke that residents in the surrounding communities are seeing around Vanderhoof and Fort Saint James is from the Shovel Lake fire, which is located about 25 kilometres northwest of Fraser Lake.”

It is being deemed as out of control and is 880 hectares in size leading to an Evacuation Alert for affected areas.

A Smoky Skies Bulletin remains in effect for the region along with the rest of the province.