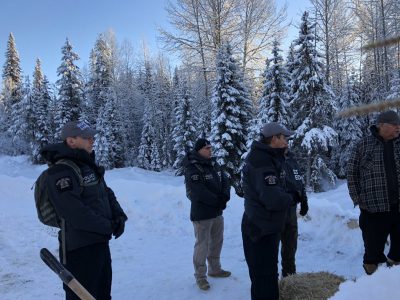 The Gidimt’en clan has issued an eviction notice to Coastal GasLink.

According to a news release, employees were granted eight hours to evacuate the area before the main road into the Lhudis Bin territory of the Gidmt’en Clan was closed.

It added the eviction order was being enforced on day 50 of the establishment of Coyote Camp, where clan members have blocked CGL’s efforts to drill beneath Wet’suwet’en Headwaters,

In a response, the pipeline project said it is concerned for the safety of the workforce due to three new illegal blockades on the Morice River public forest service road.

It added there are safety hazards on the road because of felled trees and project vehicles and equipment have also been vandalized.

According to Coastal GasLink it has made multiple efforts to engage in dialogue with the Office of the Wet’suwet’en and Hereditary Chiefs but no response has been made.

RCMP have also been contacted by CGL.

In January 2020, an eviction notice was issued to CGL and enforced that also sparked nationwide protests in solidarity with the Wet’suwet’en.

According to Farnworth, the blockades on the Morice Forest Service Road have put at risk emergency access and the delivery of critical services.

He added the province is calling for those involved to de-escalate the current confrontation as peaceful as possible.

The province has attempted to facilitate discussions between the Wet’suwet’en Hereditary Chiefs and Coastal GasLink representatives and this fall the province engaged former President of the Haida Nation Miles Richardson as the interlocutor to encourage dialogue among the parties.

According to Farnworth, CGL has all the permits required for the work that is underway.