“We may not have hit the peak yet,”: NH Medical Director on pandemic’s fourth wave 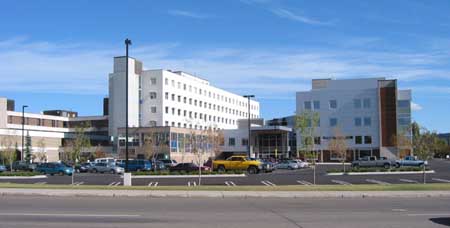 A medical director with Northern Health stated the pandemic’s fourth wave has had a crippling effect on our hospitals, most notably, UHNBC in Prince George.

Earlier this week, Health Minister Adrian Dix announced that 32 intensive care patients had to be transferred outside the region due to facilities being overloaded – 26 of those patients were unvaccinated.

Dr. Firas Mansour explained to Vista Radio how this wave is different than the previous three.

“The previous waves were not as universal. We had pockets in the north that had higher levels of COVID-19 but this time it is everywhere in the north.”

“The majority of COVID-19 patients get transferred from the northeast (Fort St. John) and northwest (Terrace). We do have two smaller sites but most of the patients, especially those in critical care do have to be transferred to UHNBC.”

Our region is currently reporting more than double the provincial average of new COVID-19 hospitalizations and Mansour stated UHNBC continues to see a steady stream of admissions.

“We started by the end of the last wave, we were having just a handful of patients in our hospital but currently, we have seen a significant increase and we are seeing about 16 most of the time.”

“We have seen a significant increase of COVID-19 patients being admitted into the hospital’s medical floor as well as to our critical care unit.”

Mansour mentioned it’s never easy telling patients they are being transferred to other medical facilities around the province.

“It’s heartbreaking when we have to tell anyone that you have to leave the local hospital and you have to go somewhere else for medical care that otherwise would have been available here. That’s concerning because the majority of those patients (the 32 transferred out) would have been cared for here in the north. The ones taking up all the capacity are almost all unvaccinated and that’s worrisome because all of the transfers were preventable.”

According to the province’s dashboard, 92 people are battling the virus in northern hospitals, 16 of which are in critical care.

“We are still around that mark, I don’t that has changed much. Every day we are almost setting new records but I hope things get back to the positive instead of the negative in the near future,” added Mansour.

“I think there is a concerning sign that we may not have hit the peak yet in particularly since our past experience that when we implement new measures it takes some time before they start taking effect.”

According to the latest data from the BCCDC, 328 COVID-19 cases were identified in the Prince George Local Health Area between September 26th to October 2nd, the most in BC during this timeframe.

This also includes rural communities such as Mcbride, Valemount, and Mackenzie.

Nechako saw 94 cases during this time frame, an area that has 61% of the total eligible population fully immunized, the third-lowest mark in all of BC.

In addition, Northern Health has the lowest vaccination rates for employees in long-term care facilities.

The health region has a 79% fully vaccinated rate, Vancouver Coastal has the highest rate at 94%.

Any long-term care workers who refuse to get vaccinated by October 13th will be off work without pay.