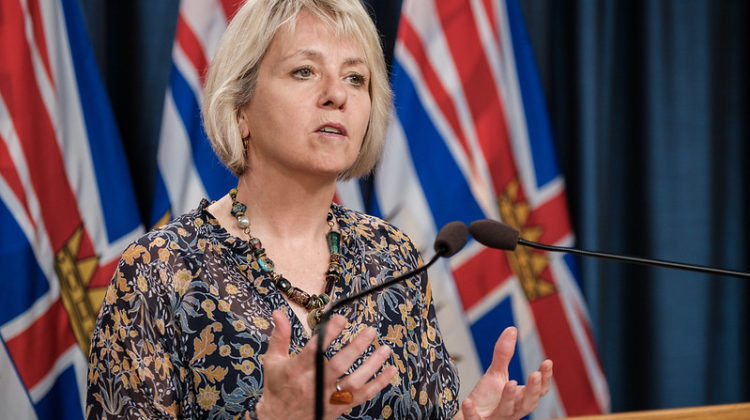 Dr.Bonnie Henry didn’t announce any changes to restrictions despite the widespread belief that rules surrounding patio dining would be altered today (Thursday).

COVID-19 transmission in the North is changing as community-based immunization plans continue to roll out across the region.

This comes as Prince Rupert’s vaccine efforts have proven to be effective, as the community saw only 27 cases between April 4th to 10th which was 45 fewer cases than identified the week prior.

Meanwhile, Peace River South cases are spiking, as the region has reported over 90 cases for three weeks straight.

Henry noted that transmission in the North hasn’t been coming from just one community, but has been affecting various communities throughout the region.

“The positive thing is that the immunization programs that we’ve been doing by community in the North has meant that we’ve taken the pressure off hospitals a little bit in the last few weeks,” she added.

Dr.Bonnie Henry says Northern COVID-19 transmission is changing as the community-based immunization rollout plan is taking its toll. For example, Prince Rupert’s cases have gone down considerably while Peace River South’s cases are on the rise. pic.twitter.com/iUiWgPF0oq

Transmission within BC’s schools was also discussed, with Henry noting that school transmission is most prominent in the Vancouver Coastal and Fraser Health areas.

“Most cases of COVID-19 among students and staff are acquired outside of school in their household or community,” explained Henry, “school transmission does not appear to be a major driver of
community transmission.”

It was also noted that when transmission occurs within the school, it is usually limited to one or two additional cases, and environments such as workplaces have had much higher rates of transmission across the province.

Modelling also showed that cases among BC’s students tend to go up when students are not in school, as they’ve been shown to increase during Christmas and Spring break.

The age-based transmission was also discussed, and Henry explained that two age groups, in particular, have seen high rates of transmission in the past few weeks.

“It is really the 19-39 and 40-59 age groups that are driving the dramatic increase we’ve seen over the last three weeks,” she added.

Hospitalizations have become more prominent in BC’s younger population as more people aged 40-59 are being administered while more people in their 60’s are entering ICUs.

“While we have seen a slight increase in people aged 20-29 that need hospitalization, the rates in that group remain relatively low, so really hospitalization is being driven by people between the ages of 40 and 79,” she noted.

She says these statistics show why it is imperative for BC to continue to base the provincial vaccine rollout plan on age.

These vaccination efforts are starting in hotspots in the Lower Mainland in the next few weeks and will use 10% of the age-based vaccine supply to target these groups.

In terms of age-based transmission, across the board, the 19-39 and 40-59 age groups are, “driving the dramatic increase we’ve seen over the last three weeks.” Transmission among the 19-39 age group tends to stem from workplaces and social gatherings. pic.twitter.com/kCwVXovrj7