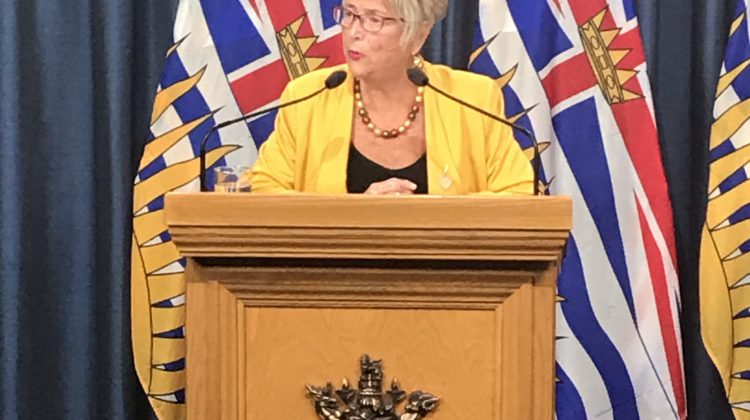 Minister of Addictions and Mental Health Judy Darcy addresses the media on Tuesday regarding the illicit drug deaths in 2019. (Photo supplied by Ministry of Mental Health and Addictions)

The overdose crisis in BC continues to be an uphill battle.

According to the BC Coroners Service, 981 illicit drug deaths were recorded in 2019, with 25 of those taking place in Prince George.

Minister of Mental Health and Addictions Judy Darcy told Vista Radio the public health emergency is taking as big of a toll on our first responders.

“For people on the front lines on this crisis, the emotional turmoil of reviving people from overdose can last a lifetime and the long term impacts of surviving an overdose can be debilitating physically and emotionally.”

She adds the large volume of deaths hit close to home.

“These numbers are a sharp reminder of lives cut too short on the families and communities who are devastated by this ongoing tragedy.”

The minister announced on Tuesday the province is partnering with the First Nations Health Authority investing 40-million dollars to build two new urban indigenous treatment centres in addition to rebuilding or renovating six others.

Darcy acknowledges the first nations population is a vulnerable one as this crisis continues.

“We’ve also partnered with the First Nations Health Authority on overdose prevention projects in all 203 first nations across British Columbia because first nations people are dying at a rate that is four times higher than the population at large.”

Coroners Service Spokesperson, Andy Watson stated the vast majority of deaths have one thing in common.

“Nine in every ten deaths are occurring indoors with about two-thirds of them happening at a private residence and 30% happening at other residences, so we know that people are using indoors and one of the things that we have learned during our investigations is that there is still a stigma attached to drug use in British Columbia.”

Watson also outlined what direction the Coroners Service is headed as the public health emergency rages on.

“What I can tell you is that the BC Coroners Service and our partners are renewing calls for improved access for a safer, more regulated drug supply in the province. With more than 5,000 lives lost since 2016, collectively we know we need to urge and continue to urge more access for safe supply.”

While the 981 fatalities that occurred last year is identical to those who died in 2016, the number of non-fatal incidents remain high.

“We’re still seeing the same volume of non-fatal events based on information we are getting from our colleagues at the BC Emergency Health Services. So what that shows us is that we are still in the midst of a crisis, one that has taken over 5,000 lives since 2016.”

Darcy said since the NDP took office in 2017, 3,500 more people are on medication-assisted treatments.

The BC Centre for Disease Control estimates 5-thousand lives have been saved as a result of interventions like Naloxone.

232-thousand Naloxone kits were distributed province-wide last year, up from the 195-thousand in 2018.

According to the Coroner’s Service, 104 overdose deaths have taken place in Prince George between 2017-19, which is the third-highest total in the province next to Nanaimo (122) and the Vancouver Aggregate (1015).

In the Northern Health Region, 67 illicit drug toxicity deaths were recorded last year, a decline from 2018 where the mark was 98.

Over 1-million Canadians have applied for Employment Insurance