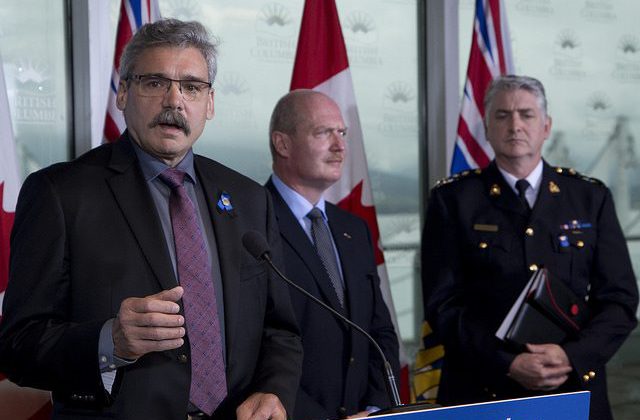 “It was very physical getting in.”

Those were the words of Prince George-Mackenzie MLA Mike Morris after yesterday’s (Tuesday) chaotic events outside the BC Legislature, which concluded with the Throne Speech.

Morris believes with the anti-pipeline protests reaching a fever pitch across the country, more should have been done to protect the workers and politicians.

“From a security perspective, from my role in the RCMP, it should have never have happened the way that it did and I think the safety and security of all the employees in the building were put in jeopardy.”

To his knowledge, a couple of people were a little worse for wear.

“One suffered a bloody nose, another one of the staff members ended up with a sprained ankle and a sore back and I understand one of the NDP MLA’s ended up falling down as well from some of the jostlings and it was just a very shameful way to treat the people’s house.”

Morris said at the very least, there should have been boundaries set up.

“There’s nothing wrong in this country with peaceful protests but I think there should have been some boundaries established before the legislature opened, the entryways should have been out of bounds. If people want to protest, make their positions known, holler and shout – I have no problem with them doing that if there are proper boundaries in place.”

Morris will also be keeping a close eye on the NDP’s promise for additional resources in policing for rural areas.

The MLA is a retired RCMP officer who believes it will take a big financial commitment from the province.

“They can’t just throw five or six or ten positions in the province when we have places like Vanderhoof alone who needs another four or five officers, there’s going to have to be some big dollars put into that if there is going to be any kind of a difference.”

According to Morris, the RCMP has been running at least 100 positions short when it comes to rural policing.

He adds it costs nearly $200,000 per officer to put in that position when you factor in administrative, training and equipment costs.

The BC Budget comes down on February 18th.