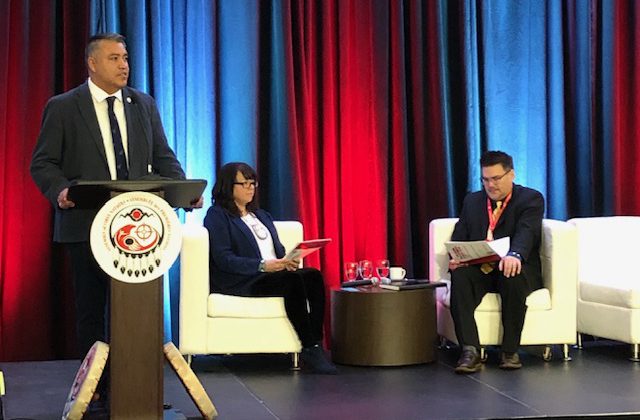 (Photo supplied by BC Assembly of First Nations)

A province-wide business forum is being hosted by the BC Assembly of First Nations today (Thursday) in Prince George.

This comes after the October Business Forum held in Vancouver, and the one previous to that in Prince George last Winter.

BCAFN Regional Chief Terry Teegee told MyPGNow.com many first nations people want to be at the forefront when important projects come to their community or territory.

At the event, delegates and guest speakers explored the Declaration on the Rights of Indigenous Peoples Act providing certainty for business and boasts a strong youth component.

Teegee adds this was the hot topic of conversation as well as what can be improved upon in the future, between First Nations, the government and the business sector.

“A clear idea of who are the proper rights holders and how decisions are being made within their respective communities should be understood by businesses and governments, the more that our First Nations, and communities iron that out, it will make it clear on who the decision-makers are.”

“In regards to understanding the declaration or Bill 41 means and also more of a recognition that First Nations rights to make decisions are human rights. We need to be involved and we need to be consulted.”