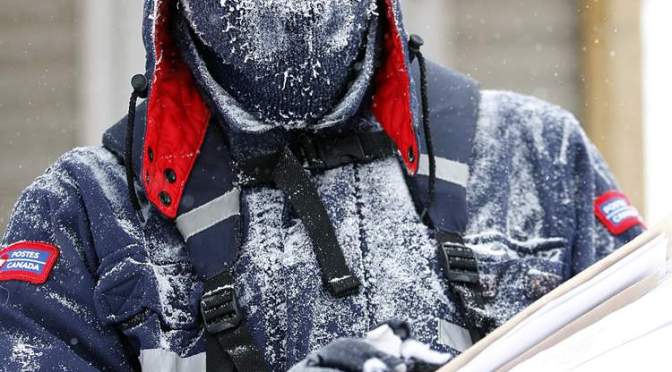 Mail carriers in Prince George will be right in the thick of the heavy snowfall and cold spell that’s expected for our area.

We could see up to 15 centimetres of snow on Friday followed by frigid daytime highs in the minus twenties for almost a week.

Local CUPW President, Clark Rasmussen told MyNechakoValleyNow.com while there is no set policy in place, mail carriers can use their judgment if it’s too cold to deliver packages.

“If some members are out there and it’s minus thirty and they take into account the wind chill factor, then they have the right to come back in and warm up or leave it until the next day.”

“Basically, there is really no policy in a place other than if it gets too extreme temperatures or a type of condition like cold, smoke or heat they do have a committee in each community where they work together with management to how to best approach that day.”

Rasmussen states he’s been through this song and dance before.

“Myself, I was in Whitehorse where I delivered in minus fifty, we had a gameplan for that particular day and obviously if it’s too cold for the cabs to run or the trucks aren’t starting then things aren’t going out so the elements do play a role.”

He adds it’s not just the wintertime that’s worrisome for mail carriers.

“It used to be more the wintertime worrying about the cold and the extremes along with the two feet of snow and now we’re at the point with the smoke and stuff like that in the summertime.”

“What we’re trying to do is work with our members more in situations like that.”

Rasmussen also asks residents to clear, salt and sand driveways and walkways to make life easier for carriers while on their routes.