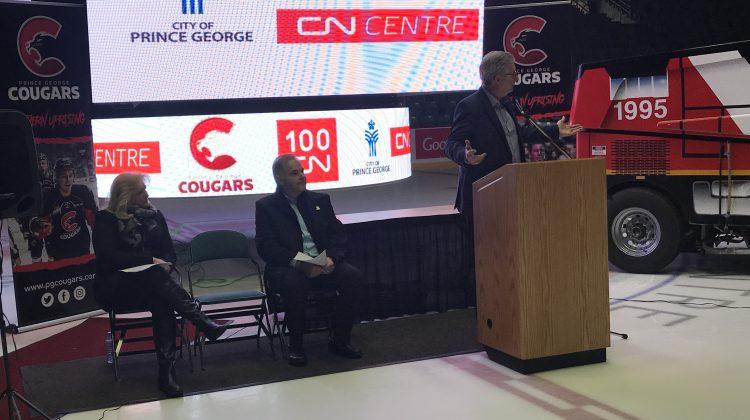 Family Day in Prince George will be more fun this year thanks to a partnership between the Cougars, CN Rail, and Spirit of the North Healthcare Foundation.

During the February 17th game against the Red Deer Rebels, the railway will buy every seat at the CN Centre making the game free to the public.

“It’s indicative of the partnership we have with CN when you take a look at CN Centre, the 100th anniversary along with the 800 employees that they have here, CN is a big operation in the city of Prince George.”

“They have longstanding ties to our area and when you take a look at the CN Rail operation here in Prince George and not only what it means not just in Prince George but to the entire northern region of the province and they are tied to the Prince Rupert Port, that’s an important thing for us.”

Cougars Vice-President of Business Andy Beesley believes this is one way to bring back the fans.

“We really think this is a special opportunity for people to come regardless of their economic background with CN Rail purchasing everybody’s ticket is an excellent way to get people out who haven’t been to a game in a while.”

“We decided that we really wanted to do something special for this region and I might add they wanted to give us a little bit of a gift out here.”

CN Rail is also donating the proceeds from the chuck-a-puck contest and other fundraising initiatives to Spirit of the North, which will support their Healthy Kids Program.

According to the Cougars Facebook page, they are already OUT of tickets for the free game.

However, the WHL club says there is a chance a limited number of tickets could be freed up in the coming weeks.