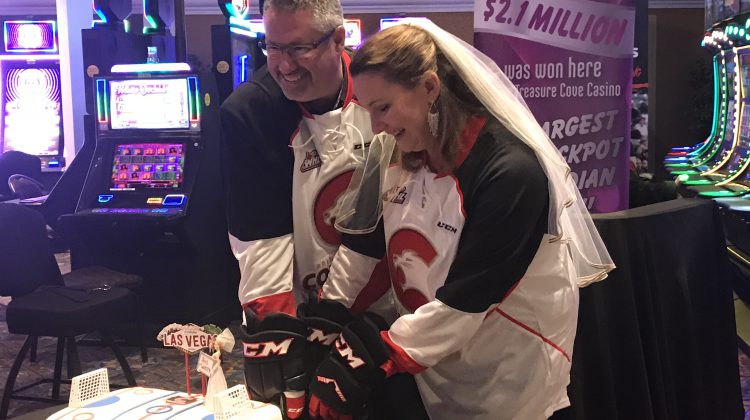 Amanda Chandler and her fiance Chris Holmes cut the cake after announcing they will be getting married at centre ice during PG Cougars game on January 25th against the Kamloops Blazers as part of their Vegas Night feature game. (Photo supplied by Brendan Pawliw, MyPGNow.com staff)

Love at a hockey game.

That’s what’s going to be happening at the CN Centre January 25th when the Prince George Cougars take on the Kamloops Blazers during their Vegas Night feature game.

It will also mark the first time a wedding ceremony will be held at a Canadian Hockey League game as Treasure Cove Casino Marketing Manager Amanda Chandler will tie the knot at centre ice with her fiance Chris Holmes.

Chandler said it should be a unique experience.

“I think I am going to be extremely nervous just doing this today I already feel nervous, I’m not used to being quite so under the public eye.”

“Andy and I started having brainstorming sessions but I wasn’t sure what Chris’s thoughts would be so I went home after that initial wedding and talked him and with Chris being Chris he’s always up for my shenanigans.”

She admits having an expanded guest list for the occasion will be pretty neat.

“It’s kind of cool being able to invite as many people as you want to your wedding though, I’m not going to lie about that.”

Holmes adds it didn’t take much to get on board.

“Oh, I’m all over this. I think it is going to be great like she said, we are going to do a separate thing off in a quiet corner just the two of us and then a party, so yeah it should all be good.”

Other features that night will include performances from Marilyn Monroe and Elvis as well as the casino giving away a trip for two to Vegas.