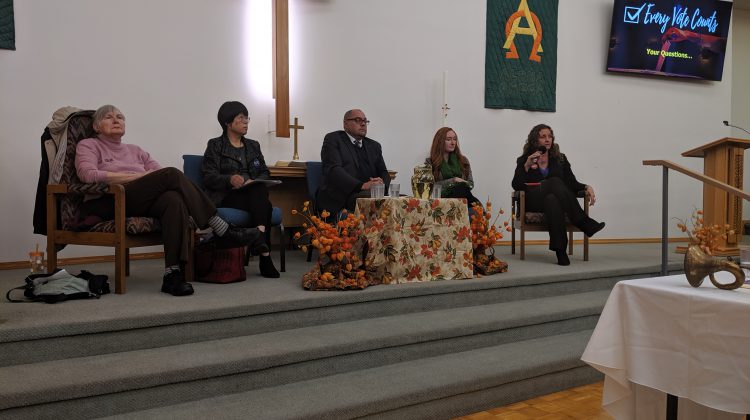 Right off the hop, the first question from the audience at last night’s all-candidates forum was a polarizing one.

The first Prince George forum for the Cariboo-PG riding this election season was held at Trinity United Church last night (Thurs) and boasted a packed house.

After introductions and three prepared questions on the topics of hospital wait times, the forest industry, and carbon reduction goals, came the first question from a man in the audience.

“I would appreciate it if your answer at least started with yes or no; is abortion murder?”

Right out the gate, the first question from the audience is “Is #abortion murder?” pic.twitter.com/jnXJfpPzHp

Heather Sapergia (NDP) started and ended her answer with “no” and moved the mic on to her neighbour, PPC candidate Jing Lan Yang.

She said she would prefer to educate people and have pregnancy centres instead of abortion clinics.

.@peoplespca candidate Jing Lan Yang says she does not support abortion. @Sapergia4MP says it is not murder. @ToddDohertyMP doesn’t answer yes or no. @mackenzieforMP and @TracyCalogheros also say it is not murder. pic.twitter.com/vKyy2vs8bI

That answer got the crowd excited enough that the mediating pastor, Rev. Bob, had to take a moment to remind them that it’s the candidates campaigning and not them.

Like Yang, Conservative Todd Doherty neither started nor ended his answer with a yes or a no.

“First and foremost that’s an unfair question. As a Christian, which I am, I was married very young and had a child very young. My choice right there should tell you my beliefs. But I am also the father of three amazing young women. I hope through my wife and I’s guidance and education through their life that we have provided them with the resources and the tools and the knowledge of God that they make the right choice for themselves.”

“I also think we should not punish those that are hurting or in crisis, that we should be helping them,” said Doherty.

Another audience member asked, “Freedom of speech is under attack in Canada between tight censorship, Antifa in the streets and two party leaders calling the police on journalists. Where do you stand on freedom of speech and will you designate Antifa as a terrorist organization?”

As Sapergia was answering the question of whether or not Antifa could be designated as a hate group, a member of the audience wearing a PPC shirt interrupted her.

“Antifa won’t let you walk the street,” she said, and the statement caused some audible confusion in the room.

Yang answered that her party’s platform is based on freedom and that she was shocked to see journalists being handcuffed or not being able to participate in events. She also mentioned a grandmother that had been bullied by Antifa.

“Antifa is the new immigrant refugee from Syria. Freedom is our fundamental value and we need to have people defending this value.” 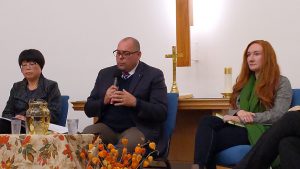 Tory candidate Doherty had had enough of what he called divisive questioning and made that clear when it was his turn to speak on the issue.

“I’m going to put a stop to this right now. All five of the people that are up here have been respectful and I am going to ask you, Pastor Bob, that you ask your audience to be respectful.”

“Government never has a place telling anyone who to love or who to pray to. I don’t even know what Antifa is, I’ve been so focused on the people here that are losing their jobs that are fighting for every opportunity here and we want to bring that type of questioning? That’s what’s wrong right now, we’ve got this BS type of rhetoric that want to divide Canadians,” he said.

His request was immediately followed by the same audience member in the PPC shirt speaking loudly over the pastor for a few moments until he threatened to “sound the horn” and she agreed to sit down.

Kerr was on the same page as her opponent Doherty.

“I also don’t know what that is. I’ve been studying forestry, in school, and very worried about our local issues. I also think that this divisive rhetoric that we’re getting from south of the border is not healthy for our democracy. I’m very upset at the sort of question. We need to be talking about issues that are relevant and local to our community and related to job loss. I know we won’t agree on this; I don’t think free speech is under attack in Canada. I think we have a great democracy in Canada and people are free to be who they want to be in Canada and love who they want and say what they want.”

Calogheros echoed those sentiments as well.

“Free speech is the foundation of our democracy and I don’t feel that it’s under attack. I do feel that far too often hate speech is defended as free speech and I don’t think that that’s helpful, I don’t think it’s useful and it certainly isn’t adding to our ability to work together in a collaborative way that’s going to actually get us to the best solutions moving forward.”

MyPGNow has a series of articles on where the Cariboo-PG Candidates stand on issues like crime, the forest industry, West Olefins, and climate change.

– with files from Cole Kelly, MyNechakoValleyNow.com