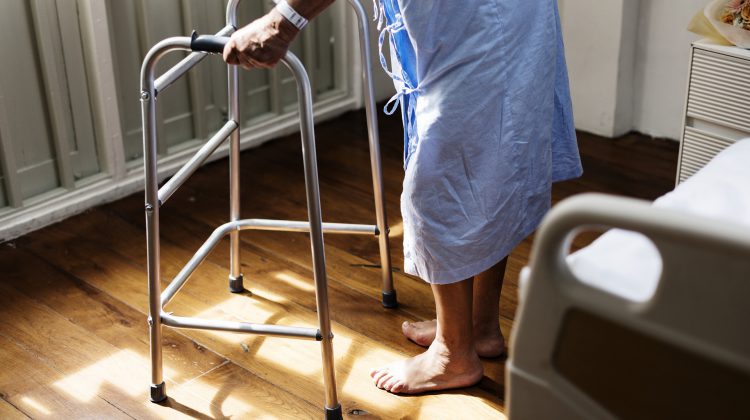 Photo of a senior in a walker. (Photo supplied by Pixabay)

There’s a demographic shift taking place right now with BC’s population where it continues to age and the need to invest in seniors care, including long-term care needs to be a priority.

According to the BC Nurses Union, one-in-four people will be over the age of 65 in the province by the year 2031.

She adds the needs of seniors have changed over time and that the facilities need to adapt in order to provide the correct care for each patient.

“These are not the care homes of our grandparents, these are patients that are now moving in with complex issues who oftentimes have acute illnesses that have to be transferred back to a hospital situation and with an aging population, we are seeing an increasing number of patients with cases of dementia.”

According to the Alzheimer’s Society of BC, an estimated 70-thousand people in BC are living with dementia while The National Dementia Strategy states nine seniors are diagnosed with dementia every hour in Canada.

To dig deeper, BC Seniors Advocate Isobel Mackenize gave a much broader snapshot of what’s going on within the Northern Health Authority and how they compare with others in the province.

According to the Seniors Advocate 2018 Residential Care Facilities Summary Report, facilities in B.C. are funded at an average of 3.14 direct care hours per resident per day.

However, Northern Health is outpacing other health authorities in BC with a mark of 3.51 direct care hours per resident as of 2016/17.

Mackenzie admits this is one of the few bright spots in the report for the health authority.

“There is more funding for direct care hours in Northern Health than there is related to the rest of the province and that’s a good thing. Part of that I think is reflecting that almost all of the facilities within northern health are owned and operated by the health authority.” 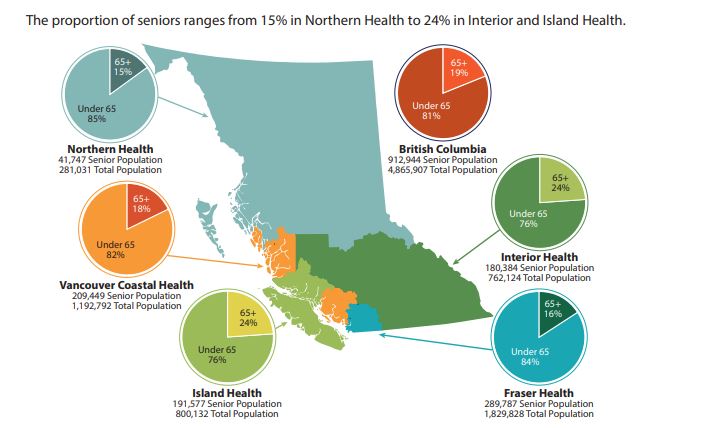 BC Seniors Demographic Map (supplied by Seniors Advocate of BC Office )

The senior population in Northern Health is 41,747, which makes up 15% of the total number of people living within the health authority’s boundary equating to 281,031.

“There’s a smaller percentage of those over the age of 65 living in that part of the province. Northern Health is actually very similar to Fraser Health with both having lower percentages of seniors,”

She believes there are a couple of reasons for the drop.

“First overall, in Northern Health there are definitely some staffing challenges in-home and community care that is unique relative to the rest of the province as it’s more difficult to recruit some of the staff in Northern Health.”

“But the other thing that my office did and this is relative to Northern Health and all of the other authorities in the province because if you notice, the number of clients province-wide decreased last year and the regulated co-payment we charge isn’t getting any better. If you’re a senior, with an income of $28,000 a year and you need daily home support, the public system is going to charge you 88-hundred bucks a year for that and I think that is becoming a challenge.” 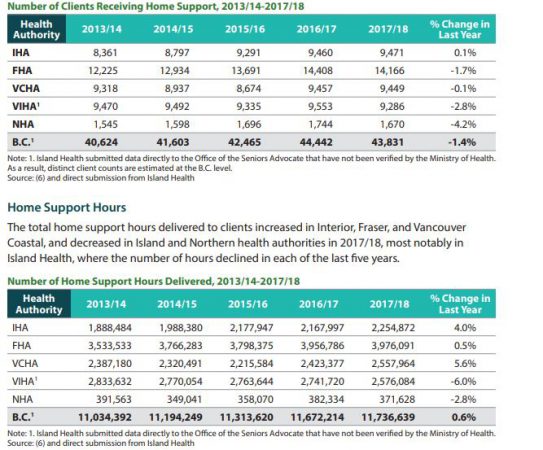 Home care services include residential nursing and physiotherapy according to Mackenzie.

“So you’re looking at about 300 fewer clients overall in the health authority and that could be attributed to some of the issues related to discharge planning at the hospital. Home care we don’t charge for so the issue related to the cost of home support isn’t relevant here.”

The provincial Seniors Advocate said the category with the sharpest nosedive in Northern Health belonged to Adult Day Program Clients where there were just 266 registered in 2017-18 compared to 313 the year prior, falling 15%.

Mackenzie’s overall synopsis of Northern Health centres around a variety of issues that need improving.

“That is a reflection of two things, it’s a reflection of the need for potentially some more long-term care beds but also looking at the home support program and the assisted living program to fill a gap for seniors who require some care to live at home but don’t need the full care that’s required to live at a nursing home.”

You can also see the Seniors Advocate Residential Care Facilities Directory by clicking on the link.