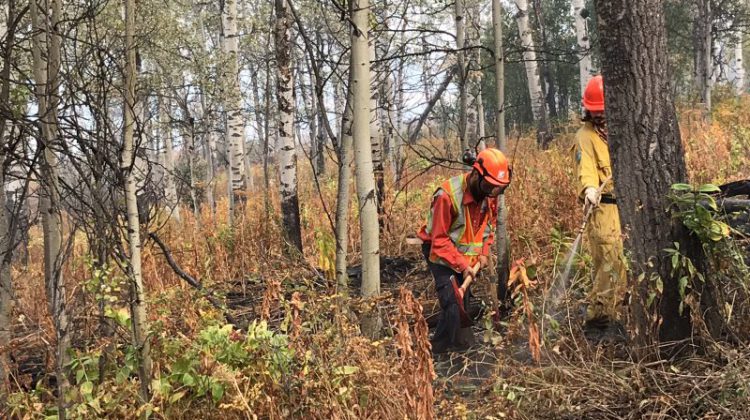 BC firefighters putting out a hot spot | (supplied by , My PG Now)

Thanks to the rain and cooler temperatures, the Prince George Fire Centre said the area is doing a lot better when it comes to wildfires compared to this time last year.

Forrest Tower, Fire Information Officer for the Prince George Fire Centre, said Prince George is doing a lot better than other parts of the province.

“We have not seen anything of particular size or intensity due to the rain we have been having but in other parts of the province though they still have had quite a number of fires.”

The Northwest Fire Centre is dealing with several small wildfires but nothing of any significant size.

Tower said compared to last year there is a noticeable difference, but when you look at the ten-year average this year is pretty standard.

He added that it would not take much for things to change.

“We have some pretty significant drought conditions right now in some parts of the province, and our snowpack is pretty low across the province, so it’s just going to take a couple of weeks of warmer temperatures and then it’s right back at it with dry conditions.”

“In the short term, I don’t think anything would happen until late July.”