A last farewell, but a legacy not forgotten: Nathan Cullen’s final speech 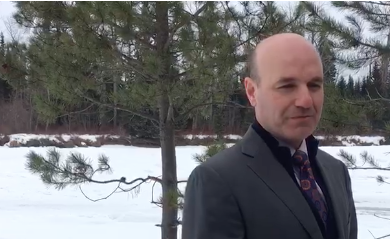 Nathan Cullen announcing he will not run for re-election | (Supplied by Trevor Hewitt MyBulkleyLakesNow.com)

“For 15 years the folks in the Northwest have put me forth as their voice; no more a humbling experience have I ever had.”

Those were the final words of Skeena—Bulkley Valley MP Nathan Cullen in his last speech in the House of Commons.

After 15 years of faithfully serving and representing the people of northwestern British Columbia, at the end of February Cullen announced he would not run for reelection, wanting to have more time to dedicate to his family.

“How in 10 minutes can you properly express the gratitude. The gratitude for the privilege and opportunity its been to be a member of parliament.”

Yesterday I rose for a final time in the House of Commons to represent the good people of Skeena-Bulkley Valley. For 15 years it has been my honour to speak in our Parliament and fight for the Northwest. It has been a remarkable and improbable adventure. I continue to be humbled by the honour in being your Member of Parliament. Ten minutes was too short a time to try and say thank you to the many people who have been part of this journey together. To all the supporters and volunteers over the years who have given up time to knock on doors, make calls or who have generously donated, I want to say thank you for believing in me and our defence of the northwest. I have always tried to bring the voices of the Northwest into our Parliament and that’s what I tried to do again last night."Farewell has a sweet sound of reluctance. Goodbye is short and final, a word with teeth sharp to bite through the string that ties past to the future." – John SteinbeckThank you

During his speech, Cullen reminisced on his early years in office and thanked the volunteers, fellow politicians, and indigenous leaders who have supported him over the years.

Originally from Toronto, he said it was a through a series of events that led him to the Northwest where he never imagined he would pursue a political career. He attributed his decision to run for a seat in parliament to the encouragement of the late Bill Goodacre.

“Politics at its best is a vocation; it should be a calling. It’s not a job; it’s not something you show up to, it’s something you are called to do and to serve that calling as best you can.”

Throughout his speech, what seemed most prevalent was his love for the people in his riding and his pride for his community.

“We have an expression up north, we say the people don’t make the land, the land makes the people. We are informed by that place, and I am proud of the work we have done.”

“To represent a place like Skeena—Bulkley Valley for those of you who have not been you have got to go. It’s this magnificent part of the world, it is vast, it is beautiful, it is breathtaking, it is the very best of our country, and even better still are the people who live there.”