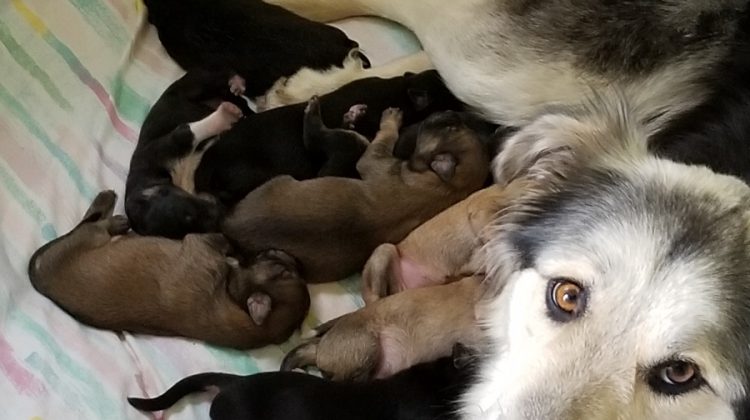 A dog and her nine puppies were abandoned at the Puntzi Lake Landfill west of Williams Lake.

A Good Samaritan found the animals sealed in a box on June 5th. The dogs were transferred to the Quesnel & District SPCA in the morning because there was no foster home available for them in Williams Lake.

“There is no excuse for simply walking away from a pet and leaving them to die,” says Lorie Chortyk, the SPCA’s general manager of communications.

“Abandoning animals is against the law and individuals can be prosecuted for their crime.”

Duane Schultz, the foster parent for the dogs at the moment, said he didn’t really know what had happened when the SPCA called him, but jumped at the opportunity to take them in.

“I knew it wasn’t good, but I didn’t know someone had put the mother and all her babies in a sealed box at the dump.”

“It’s really sad man, obviously if you found them in a box at the dump, the life prior to that, you wouldn’t expect it to be very good. It wasn’t,  because she (the mother) is doing fine dealing with the puppies, but she has definitely been abused and emotionally scarred, definitely.”

He said normal things like going outside are a struggle for Casey.

“She was obviously heavily abused before she got here,  but I am glad to say with every day that I’ve had her so far she’s coming along. And I think she’s young enough that I think she’ll get a full recovery out of it.”

Casey is approximately a year old and is believed to be a border collie, husky mix. Her five male and four female puppies are about a week old. Casey is a bit thin and focusing on caring for her babies. Staff say she’s a timid but sweet dog.

The puppies will be ready for adoption once they are old enough to leave their mother at seven weeks of age. The Quesnel & District SPCA is asking for donations of puppy pads, teething toys, sheets and small collars to help care for this little family. For donation and adoption inquiries please call 250-992-7722 or visit the branch at 1000 Carson Pit Road.

“There is help available for pet guardians who are struggling to care for their animals. They can reach out to a local rescue or the SPCA instead of abandoning them,” says Chortyk.

Anyone with information relating to this case is asked to please call the BC SPCA’s toll-free hotline at 1-855-622-7722.

Register to participate in the BC SPCA’s Paws for a Cause to help more animals in need.