Mother walking over 1200 kilometres to raise awareness about suicide 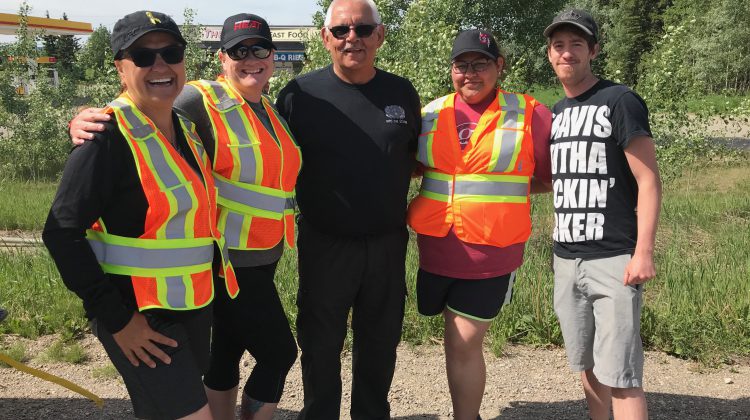 Sandra McArthur with family and friends in Prince George as part of their Community Compassion Walk to raise awareness about suicide on June 2, 2019. | Photo by Sawyer Bogdan

A mother is turning her loss into an opportunity to raise awareness about suicide and the need to talk about mental health one step at a time.

Sandra McArthur is walking 1200 kilometres with family and friends from Prince Rupert to Kamloops.

McArthur’s son committed suicide in 2015, and the Community Compassion Walk is her way to try and break down the barriers for people with mental health.

“As a mother who has lost a child to the act of suicide, I believe if we are more compassionate to one another and a little bit more empathetic I truly believe the numbers will be different.”

According to the Canadian Association for Suicide Prevention every day, 10 people die from suicide, and there are approximately 200 attempts.

McArthur said through raising awareness, she is trying to cultivate hope.

“This isn’t an aboriginal thing, it isn’t an immigrant thing, this is people thing, people of all ages are impacted by suicide.”

This morning (Sunday) she left Prince George on the way to Quesnel and will finish her journey in Kamloops on June 21.

“We may not eliminate it but what we can do is bring more awareness and be more compassionate so that if the next person needs a hand someone is going to be there for them.”