Climb For Cancer reaches new heights with $107,000 for Kordyban Lodge 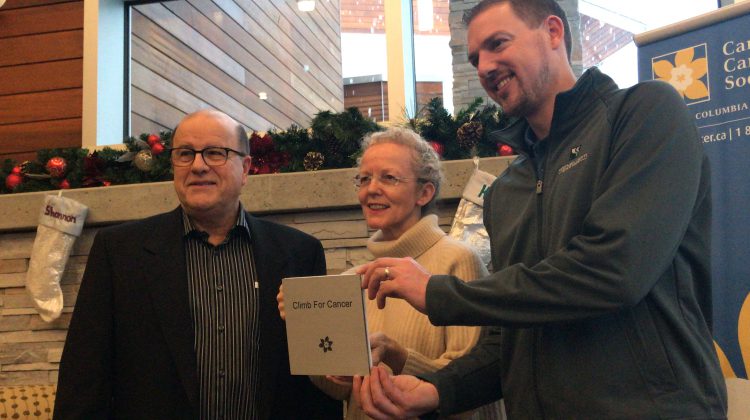 Climb for Cancer campaign presented with a plaque at the Kordyban Lodge | Kyle Balzer, My Nechako Valley Now

The cutbanks may have been tough to endure, but the cause came easy for local residents.

After its third annual event in April, the Climb For Cancer Challenge has officially raised more than $107,000 for the Kordyban Lodge, part of the Canadian Cancer Society of BC.

The facility allows residents on cancer treatment to stay closer to home, much to the delight of Campaign Chair David Duck.

“The key in my estimation is just simply spreading the word because it is such a valuable service that the lodge provides and, unfortunately, I think we’re going to see more and more people requiring the service.”

Plans for 2019 #ClimbForCancer (April 27th) are already in place according to Duck, adding they wish to reach out to more #NorthernBC communities because “that’s who the lodge serves, those who can’t make it to Vancouver” | #CityOfPG #ClimbForCancer @mypgnow

Since opening five years ago on Alward Street in Prince George, the Lodge has served more than 3,700 patients.

However, Duck believes more work can, and will, be done.

“The long-term goal would be such that we outgrow the present facilities and that the climb becomes so popular, that we have to look for a new venue to accommodate the larger crowds.”

He adds keeping people closer to their families and having access to quality care is why they choose the Kordyban Lodge instead of going to facilities in the Lower Mainland.

Plans are already in the works for next year’s Climb For Cancer, with hopes of reaching out to other Northern communities, such as Vanderhoof, Mackenzie, and Quesnel.