Northern BC Conservation cop named officer of the year 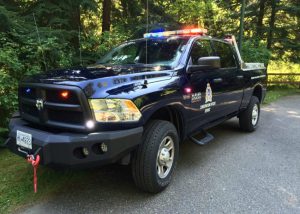 A Conservation Officer stationed out of Williams Lake has been named as outstanding conservation officer of the year for 2017.

Inspector for the Thompson-Cariboo region Len Butler started his career as a fish and wildlife officer in Alberta 38 years ago when he was given an unmarked truck with a portable emergency light, a pair of boots, a uniform, and ticket book to do compliance checks on people hunting and fishing.

“It is an honour,” said Butler who recently returned from a 10-day patrol from Smithers to Atlin where he conducted compliance checks on hunters.

“It did catch me off guard but I do appreciate that after this many years. I’m trying to enjoy a little bit of it right now.”

Butler is the 26th recipient of the Outstanding Officer of the Year Award, which has been handed out by the Province since 1992.

He started his career in Strathmore, Alberta and eventually wound up in the isolated northern community of Fort Chipewyan before his first posting in British Columbia at Nelson.

“I’ve seen a lot of changes but the fortunate part about this job is that it seems like it’s almost an adventure every day so it keeps you a little bit younger, I guess.”

BC Minister of Environment and Climate Change Strategy George Heyman said Butler has focused both on protecting animals as well as people.

“Conservation officers often face a number of challenges in the field, so it’s important we have officers like Len to provide solid leadership and inspiration,” Heyman said in a news release.

Butler said one of his proudest accomplishments is putting together the agency’s Defensive Tactics Program in 2007 for training new recruits and existing conservation officers.

“In the Cariboo, we’ve been very fortunate that we were able to acquire another position and put a full-time field officer down in the Bella Coola Valley which is very important the last few months especially with all the Grizzlies,” Butler adds.

“So I take that as a real accomplishment. We did that very well and we were able to fill all our positions, and we got every one operating at a pretty high level.”

Congratulations to Len Butler for winning the Conservation Officer of the Year award, and thank you for your 27 years of service! @_BCCOS pic.twitter.com/DwbbsM0zYs